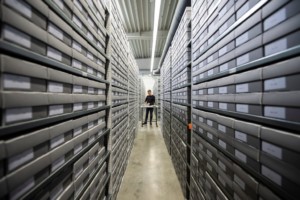 When the coronavirus prompted lockdowns, the Arolsen Archives — the world’s largest devoted to the victims of Nazi persecution — enlisted thousands of those quarantined to further the work of the archive’s “Every Name Counts” project. So far, the amateur archivists have indexed names from the archive’s enormous collection of papers, adding more than 120,000 names, birth dates, and prisoner numbers to the database.

The Arolsen Archives houses more than 30 million original documents containing information on the wartime experiences of as many as 40 million people, including Jews executed in extermination camps and forced laborers conscripted from across Nazi-occupied Europe. The documents, which take up 16 miles of shelving, include things like train manifests, delousing records, work detail assignments, and execution records.

The documents were gathered by Allied forces after WWII and stored. The archive began scanning and digitizing the collection in the late 1980s. In the last year, 26 million scanned documents have been posted online. The process is straightforward. Volunteers call up a prisoner list and type names, birthdays, prisoner numbers and other details into a form. To ensure that data is accurate, the information must be entered the same way by three different users. Participants say they relish the chance to make a meaningful contribution.

Indexing the names has a practical purpose for historians and the relatives of victims, said Paul Shapiro, director of international relations at the U.S. Holocaust Memorial Museum in Washington. But the project’s greatest value may be as a tool to help people trace their relatives’ fates and to keep the past alive, he said. “These collections are an insurance policy against forgetting…evidence that screams authenticity.”