Wilson’s Arch At Western Wall Dates To Herod The Great 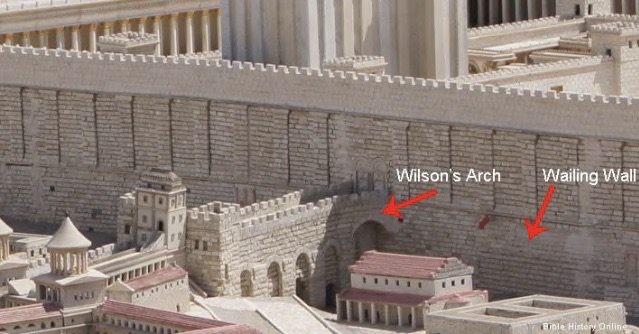 Named after the 19th-century British explorer and archaeologist Charles William Wilson, Wilson’s Arch is located at the northern end of the Western Wall, and prayer services frequently take place in the area beneath it. Recently, using radiocarbon dating and the emerging techniques of microarchaeology, Israeli scientists made a breakthrough in pinpointing its date of construction .

Wilson’s Arch was part of the Great Causeway, an ancient bridge linking Jerusalem’s Temple Mount to the houses of Jerusalem’s upper city. Construction has been the subject of much scholarly debate, with dates suggested from the time of Herod the Great (1st century CE), Roman colonization, or even the early Islamic period in Jerusalem (a span of about 700 years.)

The authors of a new study narrowed the dates of construction for the initial Great Causeway bridge structure to between 20 BCE and 20 CE, largely during the reign of Herod the Great. They also discovered a second stage of construction, between 30 CE and 60 CE, when the bridge doubled in size as Wilson’s Arch in its current form was finalized. Evidence suggests that during this period of direct Roman rule, many building projects around Jerusalem, including an aqueduct supplying water to the Temple Mount, were begun or expanded.