Shul To Dedicate And Install Gift Of Strimban Paper Sculpture 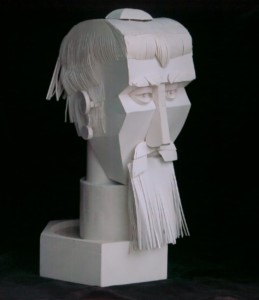 The shul is planning a formal dedication and installation ceremony of Robert Strimban’s paper sculpture titled “The Unfinished Rabbi.” The event will take place on Sunday, Oct. 20, at 11 a.m., immediately following that morning’s meeting of the Congregation, which begins at 10 a.m. All shul members are invited to attend. The Men’s Club will provide refreshments.

“The Unfinished Rabbi” is the creation of well-known sculptor Robert Strimban, whose works are on view at various museums and outdoor venues, and in private collections. In 2016, at the invitation of the shul’s Judaism and Art group, Bob, as he preferred to be called, presented a small sample of his sculptures and paintings to an enthusiastic audience of J&A members. The following year, he joined the group and began working on a piece he referred to as “The Rabbi,” a near life-sized head made entirely of white paper, fashioned with only an Xacto knife, glue, and his hands. At each meeting, J&A members could follow the slow evolution of a compelling head, elegant and dignified but with a compassionate gaze.

We will never know when Bob would have deemed the work finished, because in December 2017, he died at age 94, after a short illness. But the sculpture was shown as Bob had intended, in March 2018, at J&A’s first exhibit at the shul. Bob’s wife, artist Irma Strimban, affixed the yarmulke that Bob had fashioned for the piece in time for the opening of the show. Titled “Who Art Thou?, the show introduced the Strimban piece and examples from seven other artists working in various media to explore their connection to Judaism through art.