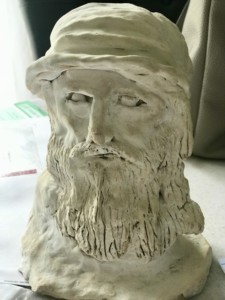 This month’s Oculus column features Graham Diamond’s sculpture of Leonardo da Vinci, perhaps the most famous Renaissance man, who is often depicted in works by other artists. The sculptor’s interpretation captures da Vinci as an inventor as well as an artist. “I pictured him in his own time in Florence, ever wary and aware of dangers around him. The eyes, which I believe to be a window into the soul, are looking with doubt and suspicion to the side, giving the face an interesting aspect, as if the viewer also is wondering about his surroundings,” the sculptor said. The piece was crafted with buff clay, fired, then glazed with white, applied sparingly with brush and sponge. Then it was fired a second time.

Da Vinci is one of the sculptor’s series on historical people he admires, among them Alexander Pushkin, Marcus Aurelius, Mark Twain, and Sigmund Freud. Graham Diamond is a member of the shul’s Judaism and Art group and also submitted this photograph of his work.