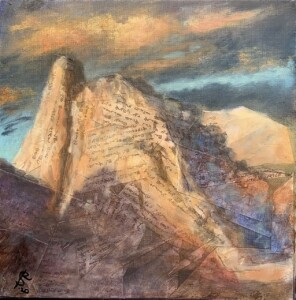 This month’s Oculus column features a painting by Saul Rosenstreich, coordinator of the Judaism & Art group. The work,  titled “The First Commandments,” an oil and collage on canvas, 12 x 12, was completed in 2020, after meticulous research. According to Biblical history, Moses descended Mt. Sinai with the Ten Commandments, but smashed them in anger when he saw his people worshipping a golden calf. God commanded Moses to replace the tablets. But what had happened to the first tablets? When J&A member Susan Weinflash posed that question, Rosenstreich responded with research and the creative energy that produced this work. Speculating that the fragments became part of the mountain, he copied writings from a 6th century BCE Hebrew text and tinted the sheet to simulate stone. He then tore the sheet into pieces and affixed them to canvas in the general shape of the mountain thought to be the Biblical Mount Sinai in Egypt. Finally he added details, such as the shadows on the mountain and the dramatic sky, with thin oil washes— and his imagination.