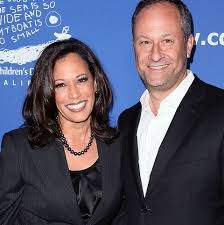 Douglas C. Emhoff (born Oct. 13, 1964) is an American entertainment lawyer and the husband of U.S. Senator and 2020 Democratic vice presidential nominee Kamala Harris. He was born to Michael and Barbara Emhoff in Brooklyn, and moved to California as a teenager. His family is Jewish. Emhoff graduated from the California State University, Northridge and the USC Gould School of Law. He is an entertainment litigator. He was previously married to Kerstin Emhoff, with whom he has two children, Cole and Ella. His children were raised Jewish. He married Kamala Harris on August 22, 2014, in Santa Barbara, CA.